An understanding of Japanese Foreign Policy is vitally important to the study of international relations. Having consolidated itself as a great economic power in the 20th century, Japan has the third largest Gross Domestic Product (GDP) in the world, is considered one of the most attractive countries for investment and has a rich ancient culture. In addition to national conjunctures, the study of the country is extremely important for analyzing the Asian region and its insertion in the world.

For this reason, the School of International Relations at FGV, in partnership with the Japan House São Paulo, organized the Webinars Series on Japan, with Japanese speakers, in which the main themes of politics and the country's insertion in the world will be discussed. The events will be in English and there will be no simultaneous translation. 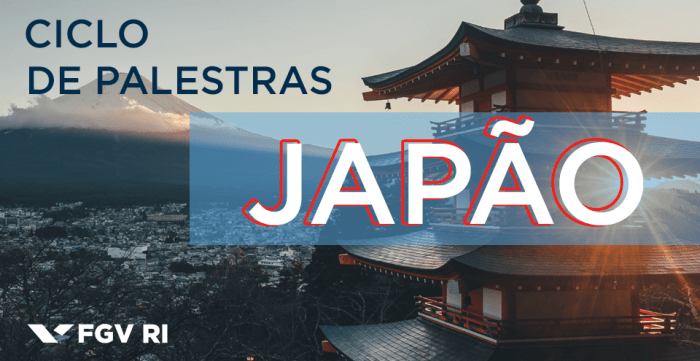 Theme: US-China Competition and its Impacts on East Asian and World Order: a Japanese Perspective

The main focus of this exposition was the current state of trilateral relations between China, Japan and the United States, with a highlight to the Japanese status and role as part of the Asian supply chain value as well as a primary U.S ally, in the context of the current state of US-China competition and risen tensions.

The lecture introduced the evolution of cybersecurity  as a topic of international concern, explained how we became more vulnerable due to the pandemic and the growing reliance on technological solutions in daily life and also highlighted the worldwide shortage of professionals specialized in cybersecurity to deal with the current and future cyber threats. Among the main findings is the importance of sharing information and best practices across borders and, therefore, international cooperation is key.

The presentation conducted pointed to elements of continuity and of evolution in Japanese Foreign Policy since the World War II. Among the main continuity aspects are the three pillars of 1) UN-centered diplomacy 2) cooperation with free and democratic nations and 3) identity with Asian nations. In terms of evolution, the main milestone is represented by the Japanese National Security Strategy of 2013, presenting national, regional and global dimensions and focusing on defense, diplomacy and development.

The exposition offered a timeframe of security relations between Japan and China since de 1970s, when diplomatic relations were normalized, until recent years. The economic rise of China and the rise in its defense expenditures and military modernization especially from 2007 onwards and the consequent increase in Japanese concerns were among the main issues elaborated on.

Complementing the security discussions held along the lectures, a domestic point of view on the Defense Policy Making process in Japan was provided, presenting public opinion polls and surveys to exemplify the people’s support to the maintenance of the four key long-standing pillars of defense policy in the country: Article 9; US-Japan Alliance as center of Japans national security strategy; defense spending under 1%; and no indigenous nuclear deterrent.

Evaluation: Prof. Dr. Hikotani raised great expectations regarding her lecture and delivered an extremely relevant, well organized and eloquent presentation. Her expositions, based on public opinion polls, made it clear that the Japanese people have a positive image of the Self Defense Forces as an institution; prefer not developing nuclear weapons; and approve the alliance with the U.S as way to keep the country safe. Also, she interestingly argued that although the four key long-standing pillars of defense policy in the country are unchanged, the defense policy-making process has changed, as a reflection of having a stronger Prime Minister.

The event had multiple presenters who exposed different aspects of education in Japan, a country with living advantages such as: high quality of life, safety, stability, health insurance, socio-economic development, scientific and academic prestige, carrier opportunities and globally recognized Universities of excellence. One of the most relevant takeaways from the event were the explanations regarding the many scholarship opportunities for Brazilian students, with special highlight to the MEXT scholarship, exclusively provided by the Ministry of Education, Culture, Sport, Science and Technology through the Consulate General of Japan in São Paulo.

The exposition presented JICA as one of the biggest cooperation agencies in the world, working alongside 151 countries (Asia, Africa, Latin America, Europe and Middle East) and having offices in 91 countries around the world and 17 only in Japan. JICA is responsible for the implementation of the Official Development Assistance (ODA) from Japan, supporting growth and socio-economic stability in developing countries. In Brazil, JICA presents two offices (São Paulo and Brasília) and the priorities areas covered are: urban issues, environment, natural disaster prevention, improvements for the investment environment and triangular cooperation.

Theme: JETRO’s institutional role in the promotion of trade and investment between Japan and Brazil.

The presentation aimed at highlighting the historic investing presence of Japan in Brazil and also at presenting JETRO and its role in the promotion of trade and investment in Brazil, which acts in a similar way as the Brazilian Trade and Investment Promotion Agency (APEX). JETRO is linked to the Ministry of Economy, Trade and Industry of Japan as has offices in more than 54 countries, working through four main pillars: promoting foreign investment in Japan; providing support to the international expansion of small and medium sized Japanese companies; promoting the exportations of agriculture and food products; providing support to business through information. In Brazil, its main activities involve: research, services, promotion of bilateral trade, the program Invest in Japan – which helps Brazilian companies to access the Japanese market –, and the promotion of innovation between Japan and Brazil.

The event evidenced the historic trade relations between Japan and Brazil, marked by a complementary inter-industrial trade in which Brazil mainly exports goods from the primary sector and imports from Japan merchandise with high added value such as automobile parts, machinery and engines. Trade has been slowly decreasing in the last decade and Professor Miyazaki has highlighted that despite the challenges of a very competitive market in Japan, there are opportunities to increment the trade of goods and services with the Japan, which represents the third economy in the world, with a high economic complexity level.

Check out the lectures on Japan House's official YouTube channel.